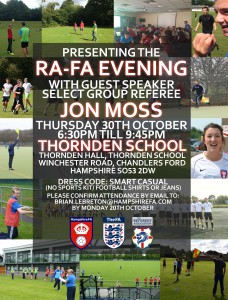 RA-FA Evening. Come along and meet a wide veriaty of other referee from really experienced with stories to tell, to newly quailfied looking for extra help.

Due to circumstances changing Jon Moss is unable to attend and is being replaced with Roger East! Roger East was an assistant referee at the 2004 FA Cup Final and 2006 FA Community Shield before stepping into the middle for the 2006/07 campaign.

Most recently, he was in charge of Huddersfield Town’s 2012 League One Play-off Final victory over Sheffield United at Wembley Stadium. In the 2012/13 campaign, he oversaw his first Premier League match, when Swansea City and Sunderland battled out a 2-2 draw at the Liberty Stadium in September.

After impressing during the 2012/13 season, East earned a permanent spot in the Select Group of Premier League officials from the 2013/14 season.

We look forward to the event and it will Definitely be a night not to be missed!!

For more details click the above picture for complete details